skip to main | skip to sidebar

I got my KNIT back! 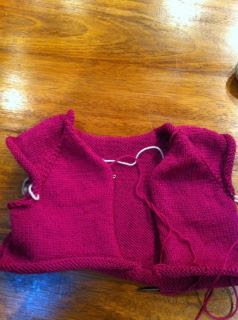 Finally, I've got my knit back ~ so glad, thought it was lost forever. I've knit a few things these past few months and haven't liked any of them (but others have, so they got them!).

Just started this a couple of days ago and it's turning out wonderful. It's the cutest sweater and for a little girl I really love!

Thought it would be a good idea to get Christmas things started and this one is the first.

Hope everyone is having a great day ~ it's chilly today, 50 degrees and foggy. Love this time of year with all the trees changing color and leaves drifting to the ground.
Posted by Elsa at 9:29 AM 14 comments:

Okay, it's been a long, long time since I last wrote in here.

Truth be told, I haven't been too very inspired of late, by anything much. I go through these spells from time to time, but it hasn't lasted quite this long before.

I work in a lovely yarn shop here in Portland (Happy Knits) and recently started working (more or less) full time. There's plenty to be inspired by there ~ lots of lovely yarns, patterns and customers coming in with great projects. My fellow workers/manager/boss are all wonderful knitters and do lovely projects too! You'd think, what with all that and the fact that I have about 4 projects on the needles I'd be more inspired ~ AND, there's the best fabric store, ever, right up the street ~ Cool Cottons with wonderful fabrics.

Guess it's just one of those times where I just don't have 'IT' and just flow with it.

Today I'm going to the Northwest Quilt show here in Portland with my friend, Annie (who is a great knitter and quilter!) and hoping to find something to tip the scale and get me back on the creative track.

Oh and on other news ~ I've been going to the gym on a regular basis and even signed up for a trainer (have two more sessions with her) and feeling great in that area.

The weight loss has been slow but steady and my clothes are starting to fit again.

Also, want to say that life is really good. I have a wonderful son and daughter-in-law that live downstairs (I own a duplex), I have wonderful friends, a great job with people I really enjoy working with, 3 of the silliest kitties ever and good health.

I didn't want to seem like I'm complaining about anything. Mostly just stating fact of what's going on with me lately. I'm really grateful for the life I live.
Posted by Elsa at 7:27 AM 3 comments:

Just a quick note to say that I've been rather busy ~ working, knitting, sewing and getting out with friends (plus going to the gym every morning!).

I looked to see when I started my blog. It was in January 2010. So I'm doing a year and a half celebration. I do it with my birthday (it being December 27) so why not with my blog! So ~ some time in July I'll be doing a little giveaway!

That's about it ~ except ~ we have SUNSHINE here in dreary, rainy Portland Oregon! Nary a cloud in the sky and the need for sunglasses! pretty amazing since it was just raining the day before.

And the winner is ~ 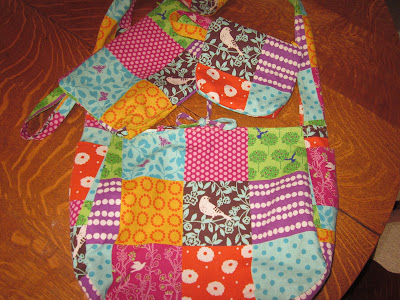 So, first off, I'd like to thank Sew Mama Sew for hosting this lovely giveaway, to everyone who visited my blog and all the kind comments from everyone.

I wish I could send each and everyone of you something, but with 343 (!) comments that would be a lot of sewing on my part (teehee).

This was my first ever giveaway and I really enjoyed it ~ loved reading all your comments. As soon as I figure out when I first started this blog ~ I think it was in June last year ~ I'm going to do another giveaway as a celebration of my first year!

So, without first ado, here's the winner of the bag and 2 zip bags (please forgive my computer disabilities as I don't know how to get the random number generator to show).

I love it -- great giveaway!

I am having one too -- hope you stop by!

Just need to email you Maureen for your information so I can send you your bags asap!

Thanks again to everyone who commented and participated in the Sew Mama Sew Giveaway!
elsa
Posted by Elsa at 10:29 AM 6 comments:

I love making bags, just about any kind of bag. Last year I probably made about 50 as gifts, bags that you can carry, like the one below or bags that you can put things in. I also like to make bags to put gifts in too.

It's got little pockets below the strap on both sides, big enough for a cell phone, a small camera or keys and a pocket on the inside as well. It also has a tie to close the bag with. 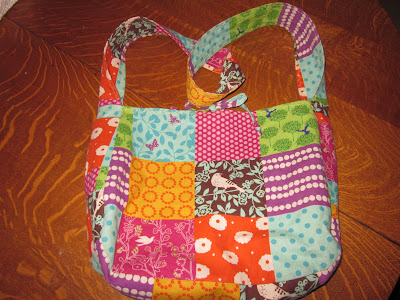 I also made a medium sized zip bag with a pocket on the inside. I've made a bunch of these too. Great to hold a small knitting project or all those little things that hang out in the bottom of your bag. I ran out of the cream with turquoise dots, so used a pretty orange striped fabric for the zips. 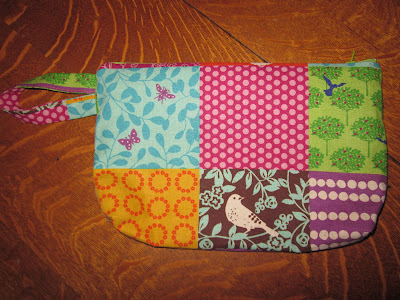 And, one little zip bag, just for fun. I know, I got a little carried away, but really enjoy making them and one can never have too many zip bags! 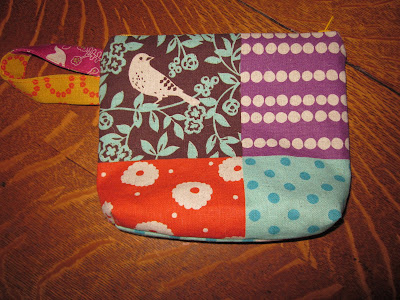 So, I'm not going to make you jump through hoops by asking you to leave a bunch of replies, just leave a little reply about what you like about the bags. Please leave me a link to your email and I'll be using the random number gadget to find the winner!

Oh, and international comments are welcome as well.

Thanks for stopping by my blog and for participating with the Sew Mama Sew giveaway!

ACK! it's been too long

I've been lazy ~ about blogging ~ I mean.

Been going to the gym everyday lately and doing good with the food thing ~ keeping track and paying attention to what I eat and drinking lots of water. And that feels so good.

My weight is changing. I can tell by what I can put on. Some pants that were just right are way too baggy and some that were too tight are starting to get loose. YAY!!! But it's so slow going. Know that's the best way to lose weight. I'm one of those people who like instant results and if I don't get them, I abandon that project, weight loss plan or whatever it might be. I know that this is something I can't abandon. It's so important for me right now. Not just because I want to look better, but because it's important for my esteem and my health.

I have more energy, my skin looks great (all that water I've been drinking really does make a difference), that little double chin I have is starting to disappear and I'm sleeping great! And, I ride the bike at the gym and I've read so many books this last month or so, every one of them wonderful!

Still haven't had the courage to put a photo up of me. I'm really sad about how I look and try not to look in the mirror at all costs. I know this is sad and makes me feel sad, but it's how it is. Trying to work through these things as best I can and to be honest about it too.

I'm really inspired by a blog I read. That Girl, That Quilt. She's going through some tough things in her life and she's blogged about it. I admire her for that, it takes a lot of courage to be vulnerable, specially in blogland.

I just am going to keep doing what I'm doing and know that the outcome will be a much more healthy me. 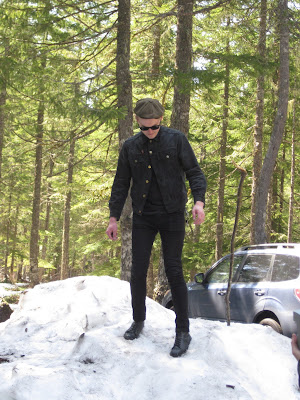 Yesterday was my son's birthday!

We started out the day with a good breakfast at Junior's over on 12th st here in Portland. It was really good. Then to Freddy's to get another lantern (caves are really dark). Then on the road to
Mt. Saint Helens to the Ape Caves and were totally surprised by snow with 70 degree sunshine! (that's my son in the picture above).

We slushed through the snow for about 3/4's of a mile to the cave and then walked another mile into the cave. Most amazing thing I've ever done in a long while. If we were really quiet, all you could hear was the water dripping. Very peaceful. 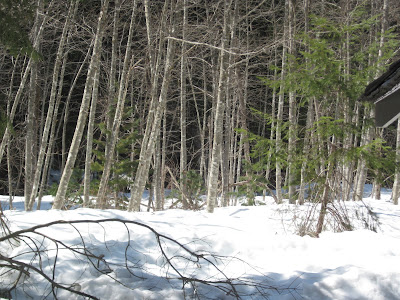 That's the snow we trudged through. It's a lot harder than I thought it would be, really throws you off balance and it's hard work. 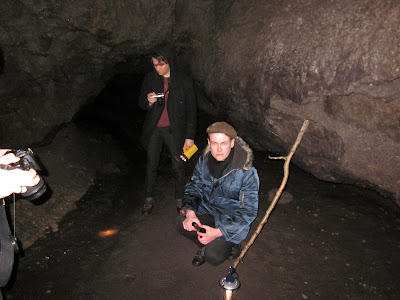 Mehran and William at the very end of the cave. We met up with a group of Eagle Scouts who gone to the real end of the cave but said that you had to get down on your hands and knees, something I wasn't going to do, so we called where we were the end of the cave.
It wasn't as creepy as I thought it would be, just very peaceful. 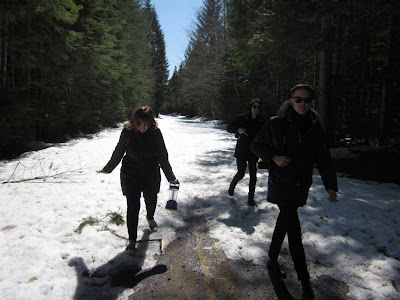 The road back from the caves. 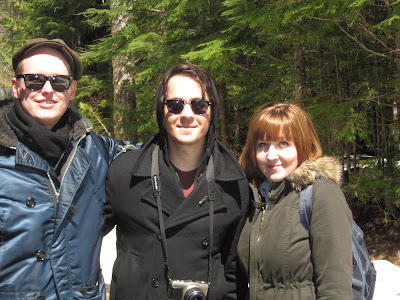 William, Mehran and Brandie ~ so much fun spending the day with them, I'm so blessed to have a wonderful son, daughter-in-law and friend. Mehran has been a good friend to William and Brandie and so glad that he could come to celebrate William's birthday!

We got home and William opened his gifts and then on to dinner at a Thai place on Belmont via the cemetery ~ it's really a beautiful one and old, so there are great photos to be taken. Great dinner and then another walk back through the cemetery and on to wonderful cupcakes from Saint Cupcake (Vegan style!).

It was a great day and wonderful to spend the day with the 3 of them.


p.s. I'm doing well with the weight thing. I want it to be faster, I want it off now! Know that this is a slow thing and it's better for it (the weight) to come off slow and steady. I've been going to the gym, eating really well and keeping a good attitude (for the most part). I've got great support from family and friends.